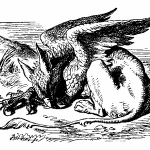 The Crimson Gryphon was a mythical creature, which was not even supposed to exist. However, many numbskulls of the lower classes had some sort of god-worship toward the nonexistent creature, which was rumored to have brought the creature into existence through a portal across the planes... now, all of this is simply hearsay from old biddies and peasants, so who could know how much of the drivel could be believed.

Retrieved from "https://redwallwars.fandom.com/wiki/User:Crimson_Gryphon?oldid=171814"
Community content is available under CC-BY-SA unless otherwise noted.