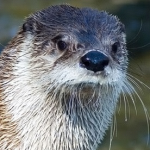 Aye, 'ello, matey, an' welcome to me profile!

Appearance: Falkin has predominantly grey fur with a slight brown tinge to it and a smaller tail as opposed to other squirrels around his age, and his eyes are hazel in color.

Clothing: For clothing, he simply wears a dark green waistcoat and a pair of round spectacles atop his nose.

Weaponry: He has no need for weapons any longer; however, he does carry a small walking stick with him on his few adventures and will use it if necessary.

Personality: He has always carried a fiery and aggressive attitude with him, but that attitude has since dwindled with the coming of old age. On the other hand, he is still very much the joking and spry youngster that he has always been. Some have even commented that he only carries the walking stick around to fool those watching him into misjudging him.

Background/History: Falkin, unlike the woodland squirrels of Mossflower, grew up in a distant eastern land across the sea. He had an average childhood, considering that he knew both of his parents and lived with them until his adolescent years. During this time, his father taught him many things, including archery and basic sword fighting techniques. His mother also taught him how to cook and apply basic healing methods. As he grew, he began to develop a sense of adventure like most young creatures do. So, when he came of age, he set off to explore the great unknown—the unknown being, in this case, Mossflower. He made the lengthy journey across the Eastern Sea in a boat commandeered by friendly otters and was dropped off near the shore, where he began a new journey, this time to fame. His tales of great wit, cunning and glory spread across the land, until one day he vanished; upon hearing about the death of his parents, Falkin realized that he had forgotten about where he came from. From that day forward, he vowed never to let his adventuring spirit get the best of him. Now, he lives a solitary life away from any major settlement and instead closer to a more peaceful bond with nature. If, for any unforeseen circumstances, he feels called to go on an adventure for some significant purpose, Falkin stands ready to help.

Appearance: Like most of her kind, Lauren has sleek, light brown fur and a thick, powerful rudder. Her eyes, which are a shade of purple, have a calming sense to them.

Clothing: She wears a golden yellow tunic, held to her waist by a small piece of rope serving as a belt.

Weaponry: She carries a short sword with her almost everywhere she goes, only setting it aside when swimming or sleeping. If she loses her sword in a close combat situation, she also has her claws and teeth.

Personality: She has a very positive and outgoing attitude about her and is always looking for ways to help others. When it comes to the safety of those around her, she can become aggressive towards those trying to do them harm. If there were one word to describe her, it would be caring.

Background/History: Lauren grew up along the River Moss with her parents and two brothers. From a very young age, she became an adept swimmer, even out-swimming her brothers in competitions that they would hold. Later in her childhood, her family had to move to Redwall Abbey due to an increase in vermin bands roaming the country. She absolutely loved her new home. She met plenty of new friends there and even joined the Dibbuns Against Bedtime group for a short while. However, peacetime can only last for so long. Later in her life, one of her brothers was killed while trying to rescue a kidnapped Dibbun in the forest. Not wanting to lose her other brother, she herself went out to save the young creature, getting her first experience of bloodshed after running through the vermin miscreant with a spear. After this event, she joined Skipper's Band in order to help rescue those in need. Lauren is clearly motivated by her brother's death and strives to avenge him. Her brother, however, remained in Redwall to care for their aging parents, and now resides there permanently.

Appearance: Swordlance is a grizzled hare with dark brown fur and hazel eyes.

Clothing: He wears the standard Long Patrol uniform, a long-sleeved green tunic with buttons, epaulets, and two pockets on his chest. He also dons a leather belt with all of his equipment: a canteen, pouches for food, and sheathes for his rapier and his dagger.

Weaponry: He carries simplistic yet sharp rapier and a small dagger.

Personality: He is a toughened veteran of the Long Patrol, and he does not take lightly to vermin. He likes food, as all hares do, and is trained in the art of battle with his sword.

Background/History: Swordlance was only five seasons old when his parents were slain by a vermin band. Shortly afterwards, the Long Patrol found him and raised him as their own. He grew up in Salamandastron, where he learned the ways of the warrior and what it means to be a hare. He eventually rose up through the ranks to become a captain, and he now leads his own division in the Long Patrol.

Appearance: Valrag has brown fur mixed with flecks of black, and you can tell from deep scars on his face that he has seen many battles. His tail has red stripes painted on it, and he has a tattoo of a flaming trident on his shoulder.

Clothing: He wears a mail hauberk underneath his khaki tunic, along with a belt fashioned out of scales, presumably from some sort of reptile. When going into battle, he wears his armored battle suit, with a helmet that has the likeness of a snake on top of it. His armor is made of thick leather and iron plating interspersed with each other.

Weaponry: He carries a trident with barbed hooks on each of its three sharpened prongs and a slim dagger with keen edges.

Personality: He is a ruthless killer, stubborn and immovable when it comes to decisions for his horde. When in battle, he encourages his troops forward and never retreats. Whenever he sets a goal, he will not rest until that goal is fulfilled.

Background/History: Valrag was born in the far north, where the lands were harsh and cruel to almost all creatures. He was raised by his parents until the age of four seasons, when he took a dagger and slew them both out of anger. He managed to survive off of water from a nearby river and food that had been stored for the winter. He started to hunt and after a lot of practice he was able to catch and prepare his own food. When he grew to become a young adult, he started attacking small villages in the north with a small group of vermin, which eventually grew to become a horde after many seasons of fighting and conquering.

Appearance: Snuffles looks like the average mouse, albeit with a roguish smirk typically plastered on his features.

Clothing: He wears a simplistic and faded green tunic with a rope girdle.

Weaponry: He carries the typical Dibbun arsenal of sticks, acorns, and whatever he can get his paws on.

Personality: Ever since he was little, he had always been known to cause trouble around Redwall, and that is no exception even now. Despite this, he has shown a tendency to care about his fellow Dibbuns, making sure that they never do anything extreme to harm themselves accidentally.

Background/History: Snuffles was born in Mossflower Woods as an only child. When a vermin band came by and enslaved his parents, who hid him away for safety, he was fortunate enough to have Skipper's Band save him from his burning home. With no knowledge of who his parents are or if they're even still alive, he grew up, and is still growing up, as a typical Dibbun in Redwall Abbey.

Retrieved from "https://redwallwars.fandom.com/wiki/User:Denrael_Sabretooth?oldid=170677"
Community content is available under CC-BY-SA unless otherwise noted.