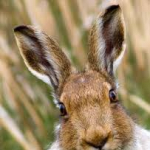 Hello and welcome to all the friendly chaps an' chappesses who've been so thoughtful as to check out this lonely corner of Mossflower, wot wot! (By the way, the blinkin' incorrect spelling of Mousetheives was intentional, wot wot). Now for a short ditty to raise me bally spirits.

The mushroom pasties are hot and more often than not,

I'll scoff them down three in a mouthful, wot wot,

Unless, that is, friends, my appetite extends,

An' as for dessert, I'm sure it wouldn't hurt,

Or a meadowcream scone, eaten down by the pond,

A Note on the Name

You may have jolly well noticed that I am called Princess of blinkin' Mousetheives, yet I speak like a flippin' hare. There's a bally reason for that.

Age: She has never remembered to keep track of age and likely will never

Appearance: Jarky is larger than most squirrels, with silver fur. Her tail is dyed white. She normally has hare ears attached to her normal ears.

Clothing: She wears a brown homespun cloak and a simple moss green tunic, belted at the waist with a burnt orange silk sash.

Weaponry: She wields a short dirk and a dagger for emergencies. However, she does not often use them as she has a tendency to forget what is the handle and what is the blade. Normally she just boxes.

Personality: Jarky wants to be a hare. She acts like a hare, speaks like a hare, fights like a hare, and even has the appetite of a hare. She is clumsy and forgetful, yet good at solving riddles and quite clever at times. She is a lovable creature, and when the Bloodwrath hits her, she does not lose many of her personality traits.

Background: She was kicked out of her home as a young one due to her appetite, and has wandered the globe ever since.

Appearance: Tyra has light, almost golden brown fur. She has unusually large ears and big, warm hazel eyes that, however kindly they may look, are capable of giving a steely stare.

Clothing: The normal green habit of a Redwaller plus a pair of round, steel framed glasses.

Weaponry: Tyra does not often go to pick up a weapon; she is normally a creature of peace. However, when the need arises, she considers herself quite a good shot with a bow and arrows.

Personality: Being Mother Abbess of Redwall, Tyra is rather clever and is always kind to her fellow Redwallers. But when someone is naughty, all it needs to quiet them down is one steely glance from the Mother Abbess. When her Abbey is in danger, she becomes quite warlike, leading Redwall into battle.

Backstory: Even as a Dibbun, Tyra showed signs of great leadership, often being at the head of the Dibbun army as it came to rob thekitchen. As she grew older, her leadership grew, and when old Abbot Dalton died, she was unanimously elected to be the new Abbess.

Appearance: Greydeath, as her name suggests, is grey all over, with darker bands across her back and a chunk missing from her ear. Though not as smart or strong as Jargo, she is slim and agile.

Weaponry: Soldiers, captain or not, are allowed only a fire blackened scimitar and a sling with a pouch of stones. Archers, spear carriers and shield-beasts are permitted to carry extra weapons.

Personality: Greydeath is an ambitious, quick-witted young mongoose with her eyes on role as High Commander. A great deal less honourable than Jargo, she’ll do anything to save her own skin.

Backstory: Greydeath was born to the rank of captain, with her mother, father and their parents before them all being captains under several different commanders.

Appearance: Larger than most polecats, Jargo is tall and muscular. Unusually for polecats, his fur is silky black except for the tail tip which is a bright golden-red. A seasoned warlord, his fur is crisscrossed with a lattice of long, white scars.

Clothing : His sturdy leather tunic is lined with some exotic creature’s fur and buttons up the middle with buttons made of shining white ivory. A hooded red cloak clasped with a wooden chip shaped like a skull drapes over his broad shoulders, and he wears a sturdy canvas belt around his waist.

Weaponry: Jargo is a skilled swordsman, wielding a long-bladed broadsword in one paw and a short dirk adorned with golden runes in the other. For long range, he carries a yew bow and a quiver of arrows, each fletched with pure black feathers.

Personality: Jargo is every inch the warlord, inflicting cruel discipline upon his ranks. However, he will not stoop to trickery or cheating. He holds his honour in very high regard. Strangely, he exhibits mercy on captured and vanquished enemies, usually letting them take their lives and freedom.

Backstory: As a young ‘un, Jargo was a lowly soldier in his army. He rose quickly through the ranks, mainly due to his utter ruthlessness in fighting. Eventually he gained control of the army, taking it westward to cooler, richer lands.

Appearance: A tall, dark-furred hare, his fur is extremely dark brown all over his body except for his right ear, which is black, and a creamy patch on his throat.

Clothing: Ginko, when he’s not wearing armour or the standard Long Patrol uniform, is garbed in a sturdy, hooded sharkskin tunic lined with sable fur. He has a fine woven kelp-belt with a silver buckle depicting a flying albatross.

Weaponry: A long, keen rapier and a short dirk are Ginko’s main close-range weapons. He also has a sharkskin-woven sling and a pouch of hard obsidian chips.

Personality: General Ginko is a bright spirited hare, happy and confident even in the midst of battle. He is, however, utterly ruthless towards vermin and is sometimes afflicted with the Bloodwrath.

Backstory: Ginko has served in the long patrol for as long as he remembers. He has become an adept swordbeast, and as a result, been promoted to General, the highest position possible.

Retrieved from "https://redwallwars.fandom.com/wiki/User:Princess_of_Mousetheives?oldid=171443"
Community content is available under CC-BY-SA unless otherwise noted.