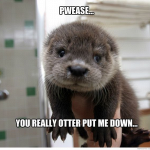 Semi-Active, working on this wiki and others

I'm an RPG'er on this site. My main page on Redwall Wiki is: http://redwall.wikia.com/wiki/User:WildloughRhulain

Wildy is an entity. Sometimes it is a character, a female otter. Otherwise, it is a female human but those are just forms it takes. It has no true form to speak of.

Alternate accounts on the site

If a user by the name LadyVader ever pops up, it's my account on the Star Wars wiki, I sometimes have more than one browser open and forget which browser I'm in.

looks up at the sight of visitors, steps out from behind bushes with javelin held loosely in paw "If ye be mates or goodbeasts, yore always welcome here in Holt Sprayrudder!" smiles and salutes with javelin, extends welcoming paw to visitors

My clan and I set up home here beside the River Moss when we first arrived and we ain't goin' nowhere. Like my grandmum, I was chosen to lead my holt at a young age.

We're doin' some redecoratin' so it may look kinda blank around here for a while, but we'll eventually figure things out and get the old holt repaired.

Name: Tiria "Wildy" Wildlough, Rhulain of Green Isle, so named after the great Rhulain who reunited the otter clans and defeated the wildcat, Riggu Felis

Nicknames: I go by many nicknames. My main nicknames are:

Eye color
Blue when calm, blood red in the midst of battle.

Mahogany brown, except for my head and neck, which are a lighter brown in color, almost sandy-brown, and a strange auburn birthmark on tip of rudder.

Medical History: Affliction: Bloodwrath. Condition: RUN! I suffer from it, but I've learned to do somethin' less than a pawful of beasts can: halt it and keep myself from killin' when I have to; sometimes in mid-action. It's saved my matey's lives more than once. An old mate I knew who could halt Bloodwrath like this spent three years in a row with me, teaching me the control necessary.

My Mum, a Mossflower otter named Kyrian Wildlough, was related by blood to the High Rhulain Tiria Wildlough, she was her fourth great-granddaughter. She and my Da, a seadog named Tobin Mossguard Sprayrudder, told me stories when I was only a kitt about Green Isle, about how after the Rhulain was called by Minasel (the otter angel of death) and crossed the Great Sea (an ancient otter term for death, the term's almost unknown now except to some otters) in her old age, they gave me her name and title to honor her and keep her memory alive.

Kyrian suffered from Bloodwrath, too.

My elder brother was killed by wildcats in front of my eyes. The last thing he said to me before he passed was "I love you! I always will. . .Avenge me, Wild. . . " I've developed a personal vendetta against wildcats because of this, even seeing a wildcat gets me angry enough to kill. I hate the scum.

Da always taught me, "never have only one weapon on you."

2: Corriam Wildlough's lance. The javelin was repaired and passed down to me through the family.

Yew longbow; green-and-silver-fletched ashwood shafts with broadhead tips. The feathers were shed and given willingly by two mateys o'mine: the silver by a falcon, the green by a kingfisher.

A silver handled dirk taken from a rat I killed in defense of a family of rabbits. Primarily, it serves me as a cutting knife, but, in a pinch, it'll work.

RPG's I have joined and am active in

In The Depths of Marshank-as Keyla

Malachi MacDougall- in Red Tables, The Greatest Threat and The First Of Many

Tavern Of The Rusted Claw- as Branna Deadrigg

Beginnings- as Bella of Brockhall

The War Of Mossflower-  as Valoran MacRyrie

Paused and Inactive RPGS I joined

D.A.B. Strikes Again- as myself

INACTIVE RPGS I WAS IN

A Nightmare of Fire and Death- as Varanno (INACTIVE) http://redwallwars.wikia.com/wiki/User_blog:Eyegrim/A_Nightmare_of_Fire_and_Death

A Bounty To Pay- as Kriasha Longfang and Lera Matten

The Diamond of Eternity- as Zahira the Vicious

Redwall in the 21st Century- as Major Devana Blackbrook

The Deathseekers- as Lady Emerald

Of Corsairs and Pirates- as Dorian Strykeclaw (p

Trouble I'm Having with Eagull And My Memory

I tried to set up an Eagull account 1-16-2012 under the username WildyRhulain, but I think it just bleched on me. *sighs, shakes head* That's typical though, knowing me. *hangs head, walks off slowly, dragging rudder* I tried to get into an RWW chatroom but got in the wrong one and someone laughed at my username. I didn't bother to say anything back or check the person's name and remember it, I just left. *puts head in paws* Maybe I'm better off just staying clear of that site.

I'm having trouble concentrating in real life now because I had brain surgery (see below section). 'I've recovered physically, but it's hard for me to think and what I want to say/type comes out slow. I'm sorry I keep messing up in chat. *puts head in paws*

Me in the real world

I'm quiet and reserved-- not by choice, but because I have a severe phobia of saying and doing the wrong things and getting people mad at me. My phobia's come true frequently, to where I think maybe it's better to just stay quiet in public situations. If I'm quiet on chat, that's the reason.

I'm a Sister (term for a woman member of our church) in the Church of Jesus Christ of Latter-Day Saints. My faith's informally referred to as Mormon. I'm not usually available on chat or Skype on Sundays (not because I don't care about my friends here, I do care) because I believe in keeping the Sabbath centered around Heavenly Father and His Son.

Most of the videos I upload are songs from the Mormon Tabernacle Choir because I love their music.

I have two main phobias: Heights and cockroaches.

I have a cat who adopted me, she's a shelter rescue and her name's Munchkin.

LEAVE ME NOT O MIGHTY RHULAIN! I HATH RETURNED IN HASTE TO MY BELOVED CHAT!Bartholomew Billberry Bowstring (talk) 18:55, November 8, 2012 (UTC)

- You've got some of the best otter rp characters this side of the nuthouse. Lord Snowstripe

Retrieved from "https://redwallwars.fandom.com/wiki/User:WildloughRhulain?oldid=170315"
Community content is available under CC-BY-SA unless otherwise noted.